Mad Wife In The Attic

Izannah Walker continues to inspire my doll making. With “Felicity,” I’ve further developed her body design and added inset glass eyes. Felicity has a cloth body that is rigidly stuffed. She is jointed at the neck, shoulders, elbows, wrists, hips and knees. Her head is cloth over clay. She is painted and her hair is cotton floss. She stands 21″ tall.  More about Felicity in this blog post (link). 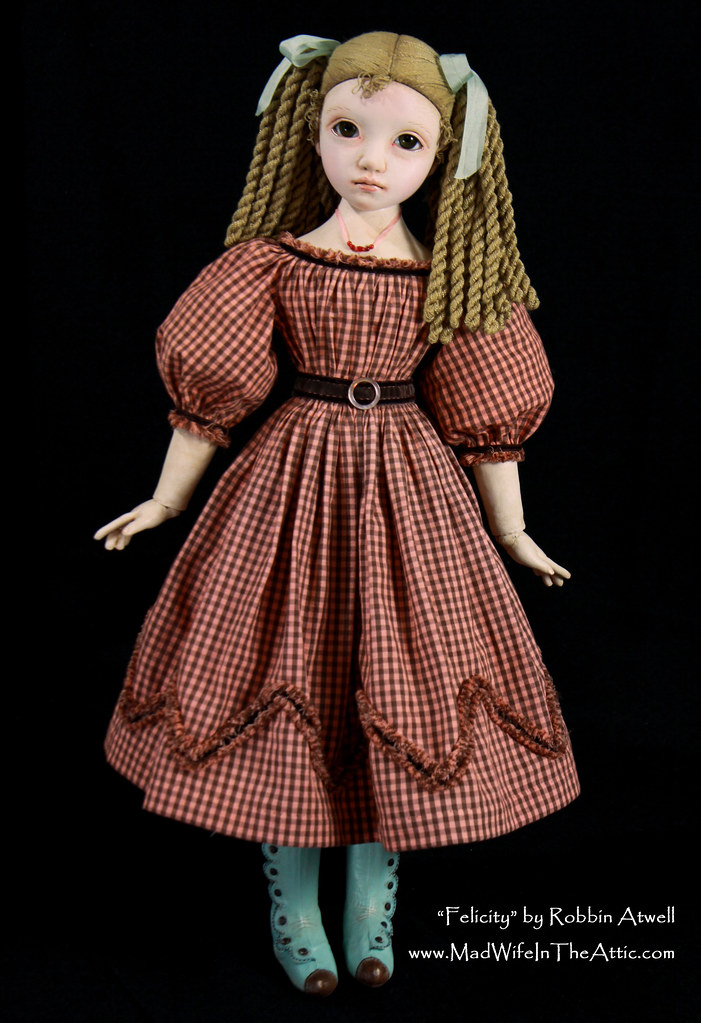 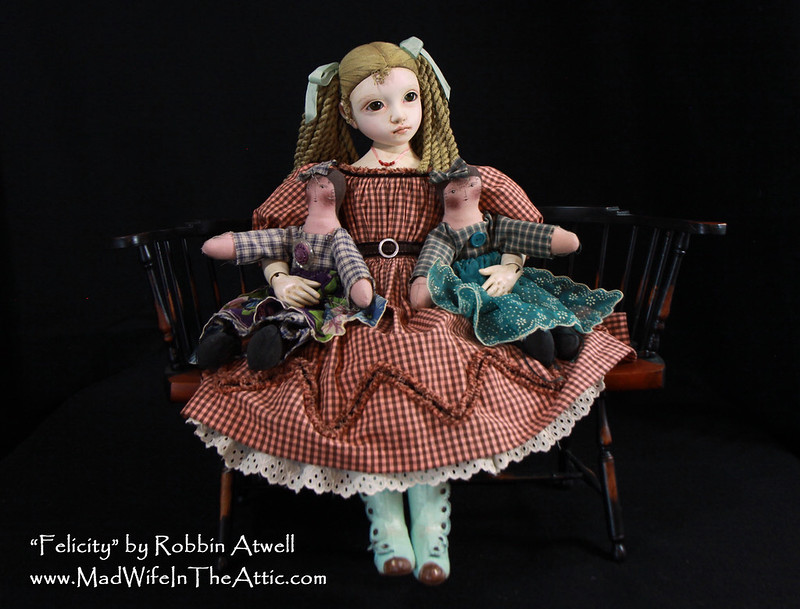 I was inspired by the 19th century dolls attributed to the doll artist, Izannah Walker, and wanted to create my own version of her distinctive dolls. I used patterns and guidance from Dixie Redmond as a launching point. Jubilee is about 18” tall. Her head is clay and fabric, her cloth body is reinforced with a wood and PVC armature then stuffed and painted. Her hair is braided wool. Her clothes and shoes are all handmade. You can see many photos of her in process in my August 11, 2015 blog post. On July 25, 2015, I also posted a brief history of the Izannah Walker dolls. 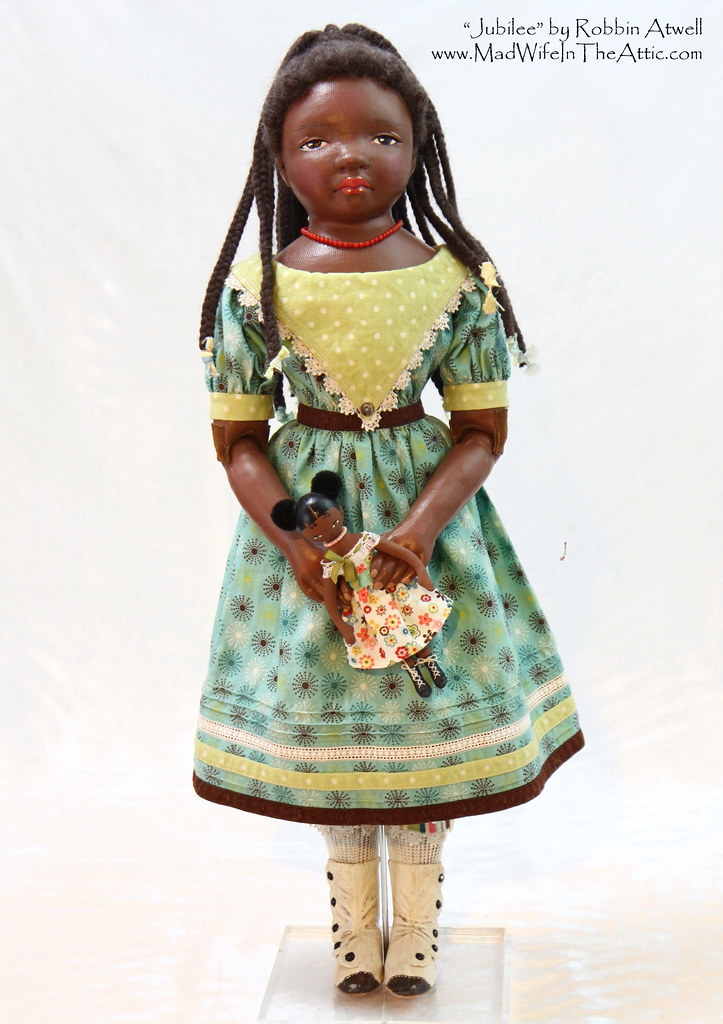 Jubilee and her doll, Zannah. 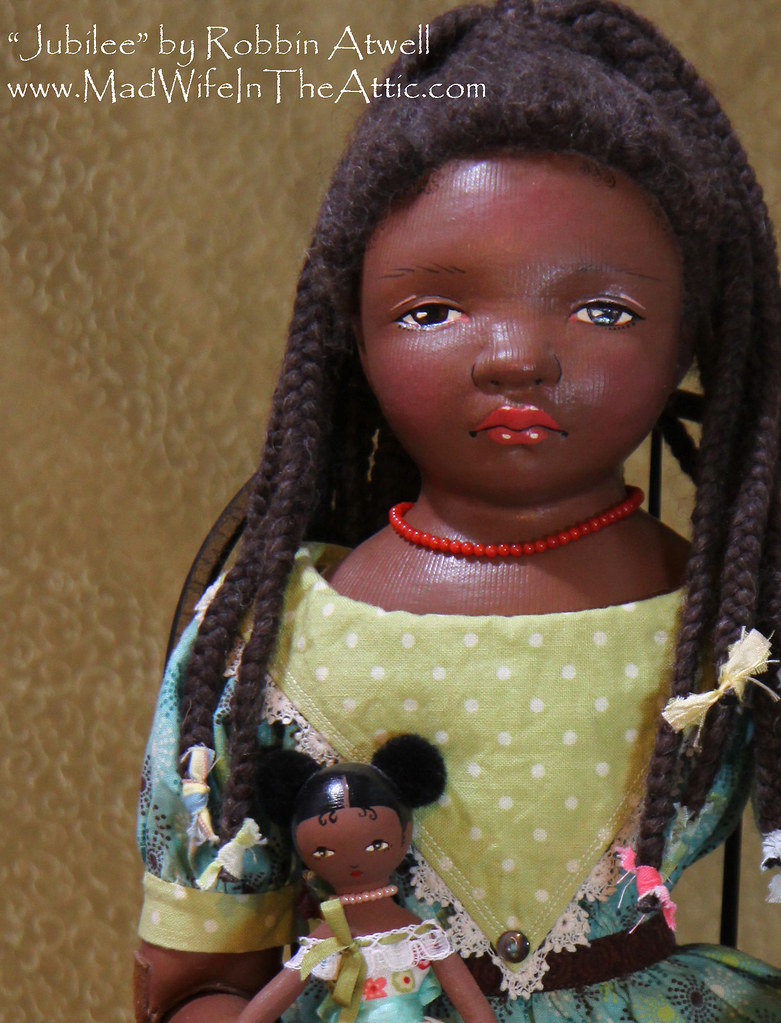 Jubilee and her doll, Zannah.

I sculpted my 2nd doll head with Cernit. It’s very durable, sands well, and it accepts new clay very well. It’s a nice material to work with. My next project will be with LaDoll clay. I wanted this girl to look as though she might have some African heritage.

I photographed my progress as I sculpted my first BJD head. I hadn’t sculpted in years. I used DAS clay since it’s cheap, very workable, readily available, and this is a project just to get a feel for sculpting again. I wouldn’t recommend DAS for anything other than practice because it leaves a fuzzy surface and it is weak in thin areas (also a bit smelly). I later coated this head in a layer of gesso and modelling paste which gave it a beautiful surface and significantly improved the appearance.

Start with the sketch and scroll down to see her evolve. I used a method that a lot of doll sculptors use–I thought I invented it but like most good ideas, a lot of other people thought of it first! If you’re planning a project, you may find these pictures very helpful.

I won’t be casting this head because it is too similar to Dollstown heads. Dollstown is my favorite company and I think I was influenced by their aesthetic without really realizing it. So, she was a good learning exercise and an unintentional homage to my favorite doll sculptor.

Started with a sketch on graph paper in actual size.

This is my styrofoam core. The first one I made was too big so this is the 2nd one

Covered the core with a thin layer of clay, getting the general shape like the sketch.

Roughing in the features. I used a rasp to remove material and you can see the gouges.

Refining the face. She’s getting there.

The eyes are cut out and the lids are built up. The brow line also needed more clay.

Once I was pretty happy with the features and the symmetry, I cut off the top of the head with a saw and removed the styrofoam core. She doesn’t have any ears yet because I didn’t want to damage her ears when sawing.

Gave her some ears. I sculpted the ears side-by-side on the table to make sure they were identical then applied them to her head.

Sculpted the inside of the head and built up the eye-wells.

This is the 3rd version of her nose. I’m sticking with this version.

Eyes make all the difference. I used eyes a lot when refining the eye shape to help with the symmetry.

I love this picture. She still isn’t finished but this is the look I wanted.

I added a surface coating of modeling paste and gesso.